Around The Piano with Tom Odell

Our four-part series celebrates the role that the piano has played in shaping pop music over the last 60 years.

“What blows my mind about the piano, is it doesn’t seem to age. And each generation of musicians seem to find new ways to use it.” – Tom Odell

We are excited to launch the award-winning singer and pianist, Tom Odell, on BBC Radio 2, as he presents a four-part series that celebrates the role that the piano has played in shaping pop music over the last 60 years.

Tom takes the audience on a deeply personal exploration of the piano through the decades. Rich with music and filled with contributions from the artists themselves, each programme will pivot around face-to-face interviews, conducted at a piano. We hear from Billy Joel, Elton John, Rick Wakeman, Tori Amos, Hugh Laurie, Richard Curtis, Dan Wilson, Regina Spektor, Matt Bellamy, Billy Currie, Tim Rice-Oxley and Rod Argent. 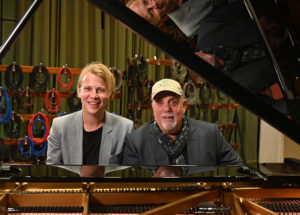 In the first episode, Tom gives a brief history of the piano and its relevance to him, talking through the instruments’ history in popular music with its emergence in the 60’s.

The piano, particularly from the middle 19th century, was a very social instrument. A centre-point for friends and family to gather around in Public Houses, schools and homes across the world. It is no surprise that when modern popular music burst onto the scene in the 60’s with bands like The Beatles and The Rolling Stones, it was a central instrument in composition and recording of the songs.

Tom explores how the piano emerged in the 60’s with its roots heavily grounded in jazz, blues, and gospel music, and will try to understand why so much of the piano playing during this time harked back to New Orleans. Tom learns why bands like The Beatles and The Zombies were so heavily influenced by these early piano pieces and he focuses on the piano greats like Aretha Franklin and Nina Simone who were heavily influenced by the world around them.

The next 3 episodes see Tom delve into the 80s music of Bruce Hornsby and Kate Bush, and then bring us through to the 90’s, with Ben Folds and Oasis’s classic hit ‘Don’t Look Back in Anger’. As we get towards the present-day, Tom explores how the piano began being used like the guitar, often using memorable melodic arpeggios and how artists like Adele began releasing the big ballads of recent years. Tom will also explore how artists such as Coldplay, Muse and James Blake are using the piano in innovative ways. He finishes by discussing how the piano might be used in the future, undoubtedly at the forefront, as it has become apparent just how ubiquitous the instrument has been in all of our lives without us even realising it.

Centred on Tom’s passion for the piano we hear his personal anecdotes of dedication, celebration and affection of the timeless instrument. The result is a rich, personal narrative series fronted by one of the UK’s leading young artists.

Catch up with the first episode that went live on Saturday evening (30th November). The next 3 episodes will be released weekly every Saturday with the Billy Joel episode going out on the 28th December.

You can listen to the series here.