What does it mean to be sectioned? Hear the reality in our latest podcast.

Our latest podcast raises awareness of some of the issues facing the most vulnerable individuals in society.

You might have heard of the term ‘sectioned’ before – but do you really know what it involves? Our latest podcast for the BBC takes the listener on a journey to explore what it means to be sectioned under the mental health act and how it can change your life.

Sectioned is presented by Danielle Manning who made the decision to look back and try to make sense of some very confusing things that happened to her when she was younger. Danielle brought her story to us and we worked together in order to develop the idea. It was commissioned as a 5-part series for BBC Radio 1 and 1xtra’s Tell It podcast strand.

The podcast starts with Danielle’s mum; a loving, fun and colourful character who knew everyone in her neighbourhood. However, she also had bipolar disorder, which meant that she often experienced long and intense periods of depression. At the time, nobody explained to Danielle what was going on. In Sectioned, we find out.

Danielle’s story is at the heart of this podcast, but we also broaden out beyond this to explore the experiences of others. In particular, the series also looks at how BAME individuals are treated in mental health services. In episode 3, Danielle interviews the mother of Seni Lewis, a young black man who died under section in 2010 as a result of forceful restraint.

Danielle also visits a mental health facility that is pioneering an alternative approach to caring for people with serious mental illness. After seeing what can happen when the system fails, it was incredibly uplifting to see what can be achieved with a more compassionate and human approach.

It’s no exaggeration to say that at every stage in this production process, I was in awe of Danielle’s strength of character. Even the very first step of handing over her story to a production company was a courageous thing to do. But I’m so glad she did – as it’s something that everyone needs to hear.

Psychosis seems to be an aspect of mental illness that gets overlooked in the discussion around mental health. But it’s much more common than one might think. I hope this series opens up the conversation, and raises awareness of some of the issues facing the most vulnerable individuals in society. 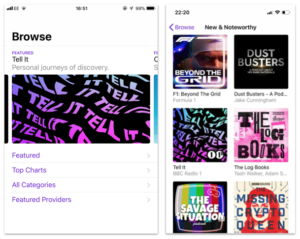 It has been great to see the podcast supported by Apple Podcasts (featured carousel and New and Noteworthy). BBC Radio 1 and BBC Sounds also featured bespoke Instagram stories to support the launch. All of this helps to get the podcast out to a wider audience, and gives the stories of those featured the spotlight they deserve.

Listen to the podcast here.