What is Hinduism? Comedian Raul Kohli is on a quest to find out in our latest podcast. 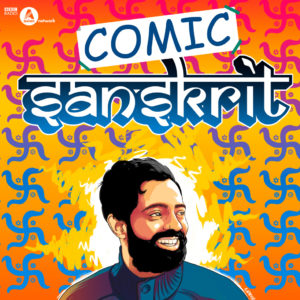 In Comic Sanskrit, comedian Raul Kohli blends stand-up, sketch, interviews and meditation in order to answer the question ‘What is Hinduism?’

In our latest podcast for the BBC Asian Network, Raul Kohli takes you on a freewheeling adventure through 4000 years of Hindu philosophy. It’s a world of monkey gods, Holy cows, X-rated temples and cannabis-laced milkshakes…and some sincere and serious introspection, of course. With any luck, you’ll be enlightened, entertained and shocked in equal measure.

Helped along by a Hindu Pandit, a yogi, some comedian friends and other wise gurus, Raul begins to realise that the religion he once thought of as restrictive and archaic, is in reality more relevant, inclusive and open-minded than he’d ever imagined. From the Kama Sutra to Roast Beef Monster Munch, Raul discovers that Hinduism has a lot more to offer him – and his listeners – than he’d expected from the world’s oldest religion.

Aside from all the laughs, what was so wonderful about producing this podcast with Raul was his genuine and irresistible enthusiasm for the subject. As a stand-up comedian, Raul’s mind is always going at a million miles a minute, whilst his body travels to all four corners of the globe to perform. Listening to Raul talking about this lifestyle, you’ll quickly get the sense that he rarely gets much time to pause for thought. But in this podcast, we get an opportunity to follow a really authentic journey of personal discovery, as Raul reconnects with a part of his identity that he’d left behind.

It also was the first time that Raul had been able to have such frank (and funny) conversations with a Pandit – a Hindu scholar and priest. Our chosen Pandit, Satish K Sharma from the NCHT, was brilliant at indulging Raul’s boundless curiosity. Questions ranged from ‘How do I calm the negative thoughts in my head?’ to ‘So is it only pensioners that can get blazed?’ (There were also extensive conversations about global politics that didn’t make the edit, but I’m sure Raul would love you to have the raw audio if you’re interested…).

As Satish Sharma explains, Hinduism isn’t really a ‘religion’ in the western understanding of that word. It’s more like an expansive, uncontainable and limitlessly nuanced philosophy, a collection of conversations over thousands of years and stories passed down through the ages. We also found that it was a really fun, playful and brilliantly eccentric subject to work with in audio. I highly recommend listening if you want to hear what happens when a comedian wrestles the beliefs of billions of people across thousands of years into the format of a comedy podcast series.

Listen to the podcast here.